A young prison officer described her actions as ‘very, very silly’ after she had ‘phone sex’ with an inmate serving 11 years for a string of robberies.

Millie Davis, 23, worked at HMP Lowdham Grange where she also became a member of a specialist prison security team which ensured the safety of prison officers and prisoners.

An investigations manager at the prison became aware of information suggesting Davis was acting in an inappropriate manner regarding a prisoner. 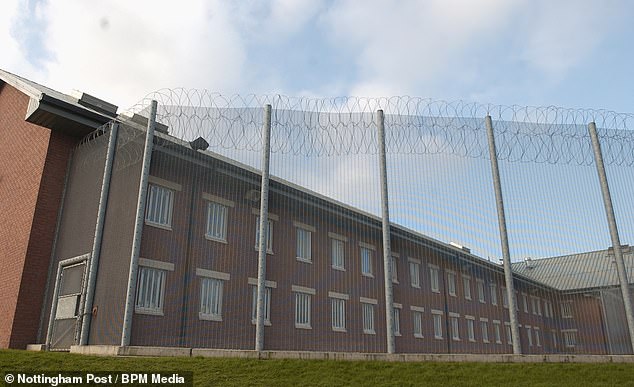 Millie Davis began a ‘cyber relationship’ with an inmate at HMP Lowdham Grange, pictured, while working as a prison officer

She listened to a phone call where the two parties expressed their respective feelings towards one another and police were called.

Davis said she started receiving messages via Instagram at the end of 2018 from an unknown person.

She worked out the person sending the messages was the prisoner in question.

He had badgered her for her mobile number one month earlier, Nottingham Crown Court heard.

She knew the man had a mobile phone in prison and another device which gave him access to the internet.

‘His possession of those items were against the rules and she chose not to report it,’ said Alan Murphy, prosecuting. ‘She said they said they ‘loved each other’ and it was a cyber relationship.

‘She said she acted normally at work because she did not feel it was real; because it was all taking place over the phone. She confirmed she had all the corruption training’.

She denied in interview she had disclosed anything about the prison security team, and described her actions as ‘very, very silly’.

She was suspended and resigned. At court, she pleaded guilty to misconduct in a public office between December 31, 2018, and May 1, 2019.

Jasmine Kumar, mitigating, said Davis began her employment when she was 20 years of age and went on an eight-week training course.

She came across the inmate, aged 25, serving the 11-year sentence and she formed a personal attraction.

Davis said she ‘engaged in phone sex’ – which she had not engaged in before – but went along with it. She is now in the beauty trade in Worksop.

Find out more or adjust your settings.

This website uses cookies so that we can provide you with the best user experience possible. Cookie information is stored in your browser and performs functions such as recognising you when you return to our website and helping our team to understand which sections of the website you find most interesting and useful.

Strictly Necessary Cookie should be enabled at all times so that we can save your preferences for cookie settings.

If you disable this cookie, we will not be able to save your preferences. This means that every time you visit this website you will need to enable or disable cookies again.